This decision, informed by a comprehensive review of all league and cup competitions, was taken at a Board meeting held on Friday March 20th.

For clarity this decision applies to all WRU cup and league competitions currently underway as well as the cross-border competition between Welsh and Scottish clubs due to kick off in April.

·         Continuing to play brings with it transmission risks for players, coaches, referees, volunteers and supporters

·         Some competitions require medical support and doctors in attendance

A review of the competitions was also considered with the key points being:

·         There are 1,113 WRU Specsavers National League and Indigo Group Premiership games that would need to be played to complete league competitions

A significant number of potential solutions wasexplored, but ultimately it was agreed that the only consistent and fair option is to cancel the season, meaning:

·         Rugby activity remains suspended until further notice and this includes no organised training or games, use of club gym facilities,  organised sessions or unsanctioned gatherings at rugby premises.

‘We are well aware of the colossal amount of effort that goes into our game, on and off the field, across Wales,” said WRU CEO Martyn Phillips.

“We did not take this decision lightly. It is not intended to in any way diminish the games that have already taken place or the efforts of everyone involved.

“We were particularly aware of the impact on clubs with the potential to be promoted or win competitions, but in the end we have had to make the decision to ensure we play our part in safeguarding Welsh communities.

“We know clubs will be disappointed but also hope they will be understanding, given the circumstances.

“We know that rugby clubs are facing extraordinary challenges at the moment.

“We will continue to look at all options to ensure the game in Wales emerges from this period and continues to play the vital role in Welsh life that it has for the last 140 years.”

Following discussions between the 1995 skipper Andrew Oliver, and the club, it has  been agreed  to postpone the 25th Anniversary Reunion Dinner until the start of next season. A new date will be announced as soon as it’s possible.

The WRU has released the following statement:

The WRU, having considered expert medical advice has taken the precautionary measure of suspending all forms of rugby, including training and rugby-related courses, from 6pm on Saturday 14 March up to and including Monday 30 March. The WRU has taken this decision in the interests of players, supporters, volunteers, referees, stakeholders and Welsh communities in general.
The WRU will continue to assess this fast-moving situation and provide further updates in due course.

From the WRU:
Further to yesterday’s announcement that the Guinness Six Nations fixture versus Scotland scheduled for today has been postponed, please note that at this time, the date of the re-arranged fixture is not known.  However, see below further information in respect of tickets purchased to date by clubs, which aligns with the ticketing term and conditions.

All tickets purchased for the fixture will continue to be valid for the re-arranged date, please ask members to keep their tickets in a safe place.

In order to complete the refund, the original ticket will need to be returned to the WRU Ticket Office.

Tickets that were assigned and purchased by end users via Allocation Manager Portal (AMP) will be managed by the WRU Ticket Office and communicated with the same offer.

At this stage, we do not advise that clubs refund end users requesting immediate refunds and follow the above process.

The funeral service for the late Horace Matthews, due to be held on Tuesday 31st March at the
Congregational Church in Cwm, has been cancelled. The family will arrange a memorial service at a later date.

Horace played for us in that great team of the 50s as an excellent, hard-as-granite back row forward. He represented Monmouthshire and played in the combined Ebbw Vale and Abertillery XV that played the New Zealand All Blacks. After his playing days ended, Horace served on the club committee for many years, including a stint as Vice Chairman.

Our thoughts are with Horace’s family.

If you were at Narberth RFC, with several hundred other Ebbw supporters, watching Andrew Oliver lead his team to a victory that secured promotion to the top tier, then the 25th Anniversary Dinner (poster below) is the place you’ll want to be. And you’ll still want to be there, to celebrate one of the great days in our club’s history, even if you weren’t at Narberth all those years ago. 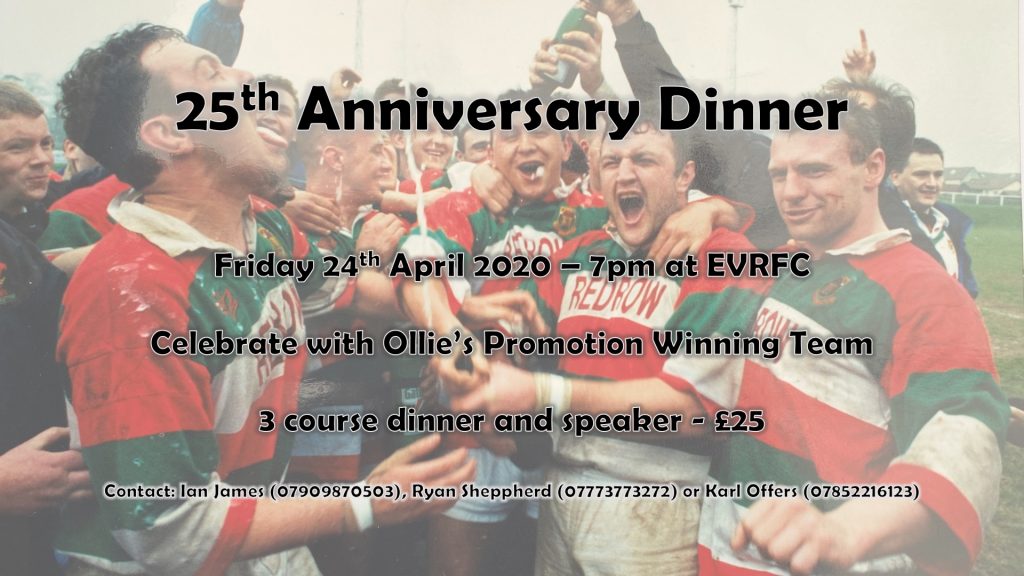