After 15 years service and 290 games as hooker in both successful and struggling squads, Chunky, as he is affectionately known to all, has decided to hang up his boots. This total would have sailed past 300 had he not suffered bad luck with injuries over the last 18 months

The following comes from the man himself:
“I would like to take the opportunity to thank everyone who was part of my time at the club, from the back room staff, committee, coaches, players and of course the best supporters in Welsh rugby. The club has been a major part of my life since I first joined in my last year of youth rugby in 1999 and will always be close to my heart. Rugby is about making memories, and some of my best memories are playing for this club, alongside close friends who will remain as lifelong friends. Thank you all once again.”

Mathew initially joined the Ebbw Vale U21’s squad, known as Ebbw Vale Steelers, where he was player of the year, from his home village team of Oakdale RFC. His time with the Steelers was combined with 2 years service with Abertillery. He progressed into the senior game making his debut at Rodney Parade on a Boxing Day as a substitute at the end of the club’s professional era with Mike Ruddock being the first coach to make use of his undoubted talents. Following a season with Brynmawr, he returned to the club where he has been a popular squad member and a long time favourite of the Ebbw Addicts

There are many memories of Mathew Williams, someone who will forever be referred to as the Clubman of the Decade, an award he won twice along with “The Man of Steel”. Not only was he a very fine player who possessed sublime skills, but he was also a loyal and dedicated clubman and one of a few who stayed with the team when it was being relegated. The teams for the last Premiership game of 2009/10 and the first Division One East game the next season bore little resemblance to each other. Only two players stayed with the club and they were Chunky and Andrew Bevan, men with great experience who went on to play a leading role in our revival, these 2 close friends were essential to the rebuilding of a club, a team and an ethos that would deliver success in the following seasons. Indeed it was a great relief when Chunky said he would remain with the club!

His commitment was immense in those early days and although reluctant to be a captain, he led the side for almost half a season when Damian Hudd sustained a serious knee injury. Like everything else, he did it brilliantly and without fuss!

A new team took shape from the start of the 2009/10 season and a front row of Ross Jones, Chunky and Robert Sevenoaks with locks Ashley Sweet and Damien Hudd behind them formed a legendary front five.
Officials and Addicts alike hoped Chunky would play forever, we will miss his darting runs and the feeling of confidence we had when he took the field. His contribution to Ebbw Vale was unsurpassed.

His part in our winning of the Premiership cannot be underestimated, the accuracy of his lineout work being a key component of the now famed Catch’n’Kynes move that led to many wins in that year.

It is important to get the views of some of the coaches who have worked with Chunky over the years.

Jason Strange has had this to say

It was a privilege and an honour to coach Chunky for 5 seasons. He has given every ounce of blood, sweat and tears to the club for his entire career and it will be a massive challenge to replace such a fantastic clubman and player. Over the last 15 years I cannot imagine anybody who has been such a consistent performer in the team as he has. Whether the team has been successful or not, Chunky’s performances have always been very strong. What has made him stand out is courage, commitment and remarkable durability. He has been hugely successful as an individual, and part of some very good teams, and has been someone who has always stepped up when it mattered in the big games and delivered.

From Alex Codling
What can I say about Chunky? Diminutive in stature with the heart of a lion and everything good that you would want in a rugby player. When I first met him, I thought he was a back! I soon realised how pivotal he would be to the team. He was a real high quality exponent of the set piece skills but also a dynamo around the field. One of those trademark runs led to a try in our Boxing Day Derby win away to Llandovery in front of the tremendous away support all dressed in Hawaiian shirts. All the very best to you Chunk in whatever you do next, a great guy and part of a great bunch of lads.

From Nigel Davies: Mathew Williams (Chunky) – The Player, The Man

Every coach knows that a squad of players has its own dynamic and culture which is a product of many factors and includes the balance of the personalities within it – much like any business or organisation.

On first arriving at Ebbw Vale it was important for me to understand and establish the personalities within the group and within a few hours of arriving one of my first unannounced visitors was Chunky which in itself told me much about the man. As we’d never met before, he was keen to chat through some things with me regarding the season gone, general rugby philosophy and equally I think to assess the new guy at Eugene Cross Park!

His passion for Ebbw Vale and love for the game was clear from that first meeting and he has a way of being very straight yet professional, some might say grumpy, but I would say more focused and demanding of those around him. The best players I have coached have naturally had this demanding quality which for them is all about getting the most out of themselves and others to be the very best they can be and having these types of player is essential in driving the progress from within a team.

Chunky is that rare player. A coach’s delight as someone that you can rely on to do the right thing, to be part of the team, drive standards, positively challenge himself and others, display good values and in his case produce rugby moments of pure genius and magic.

Above all else though he’s a good bloke with great values – and to paraphrase a famous Rudyard Kipling poem “if you can walk with the crowd and keep your virtue, or walk with kings nor lose the common touch – you’ll be a man my son” and Chunky stands out as a man in rugby.

The sentiments from these 3 coaches sums up his contribution on and off the field and for me personally I could rely on him to do the right thing for the club at all times. It’s been a pleasure to watch him play and to share a few drinks with him. I along with many others will miss him greatly but look forward to seeing him at our presentation and at future games.

Ebbw Vale RFC are pleased that several current Steelmen will be involved in this game to celebrate the life of Phil Swan. Sam Ireland, Callum Hall and Rob Sevenoaks will all hopefully feature. This will be Oaksy’s 10th appearance for Monmouthshire.
Phil made a huge contribution to rugby in Ebbw Vale for many years, always having players, RTBs and the town close to his heart. He’s still very much missed by us all and we hope supporters will join together at RTB’s ground on Thursday evening, kicking off at 7pm.

Toby Fricker, in his first season with the Steelmen took the prize as the Most Promising player, following some outstanding performances throughout the year. The medical team were joint winners of the Unsung Heroes award, along with the counterparts at Bargoed, Newport and Aberavon, for their lifesaving interventions off the field at matches this year.

Everyone at ECP is rightly proud of our prizewinners, and sends congratulations to all those rewarded this year.

The club is delighted that winger Toby Fricker has been selected in the Wales Sevens Squad for the forthcoming Rugby Europe Tournament in Moscow. The Squad will depart on Thursday 17th May and return on Monday 21st May.

Congratulations from everyone at Ebbw Vale RFC!

There’ll be a night of drag and frolics at Ebbw Vale RFC on 29th June, complete with two artistes, food and a late night disco.

Contact Karl on 07852 216123 or speak to any member of the Ebbw Addicts committee for tickets.

*PLEASE NOTE THAT THIS EVENT IS OPEN TO ALL ADULTS* 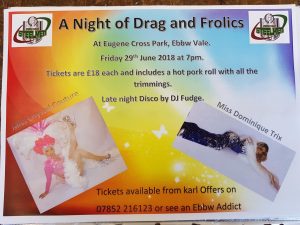 The evening will consist of a 3-course meal as well as the presentation of the club awards.

Cost per person will be £25.
Tables of 10 can also be booked to the event.

To book your place at the club dinner contact

You can also book places at the event at today’s match against Bedwas.

All tickets to be paid for before Friday 8th June

The WRU have confirmed that the result between Bargoed and Ebbw Vale will stand as it was at half time when the match was abandoned. The WRU has recorded a 3-15 win to Ebbw Vale, 4 league points, and there will be no replay.

We are extremely grateful to our friends at Ebbw Vale Cricket Club for agreeing to accommodate us by moving a Youth Team fixture on May 9th, when we play Merthyr, and allowing us to play Bedwas on May 6th.

The Bedwas game will kick off at 2:30 pm while the start time for Merthyr has yet to be confirmed.

Our away game at Cross Keys has now been agreed for May 15th, kicking off at 7:15pm at Pandy Park.