HOME > Time to get excited!

After a complete squad overhaul with over twenty new players and many changes off the field we are about to begin a new era as a club with our first pre season fixture against Neath, The Welsh All Blacks this Saturday kick off 2.30 pm.

Jason and the coaching team have been working hard during the off season to increase standards and instil a strong team ethos and positive culture.

The main priority has been to recruit a particular type of player who will fit in to the Ebbw Vale environment and be fully committed to the journey ahead.

They have signed players, many that are local who are young, talented and ambitious. Saturdays game will give the coaches an opportunity to observe the players in a competitive environment against a well coached and established Neath team.

We now call on the Ebbw Addicts to outnumber the Gnoll crowd and shout on the Steelmen this Saturday at 2:30pm

Ebbw Vale RFC are delighted to announce the continued support of MetPro Wales for the forthcoming 22/23 Indigo Welsh Premiership Season. We would like to thank MetPro for their support of the club over the years and cannot wait for you to join us at some of this seasons fixtures.

MetPro (Wales) are again proud to support and sponsor Ebbw Vale RFC for the new 2022-2023 season.

We as a company have supported Ebbw Vale Mini and Juniors over the years along with the new U18’s Youth Team and most recent the Premiership Senior side.

We take pride in helping where we can for grass roots rugby and can’t think of a better club to be partners with.

We look forward to watching and supporting the lads this season “On The Bank” and wish everyone at the club all the success for this coming season.

PRE-ORDER DEADLINE EXTENDED!
Order your Ebbw Vale home or away kit with your name and number on!
You have until Sunday 7 August to get your orders in!
Shop the range now at www.evrfc.shop
#Steelmen #FeelTheSteel

We are delighted to announce that David Spear have extended and expanded their commercial sponsorship of Ebbw Vale RFC for the 2022/23 season. You will now see the Steelmen wizzing around the roads and to games in our lovely shiny new kit van and will also feature on the match shorts and warm up top.

” We are delighted as ever to continue and increase our sponsorship with Ebbw Vale RFC. We hope supplying a Kit Van will give the club more support for those crucial away games. Everyone at David Spear Commercials & Spear Vehicle Hire wish the club all the best for the up and coming season “.

Check out an array of vehicles here https://www.david-spear.com/ 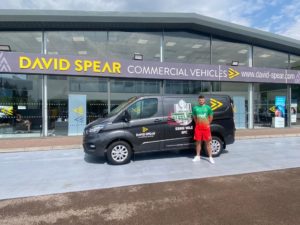 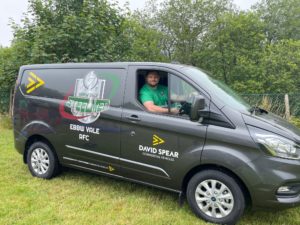