Your Steelmen squad to take on Cardiff this Thursday at Cardiff Arms Park with a 7:30pm kick off in the Indigo Welsh Premiership. Lets have a vocal Ebbw following to shout on the boy’s! 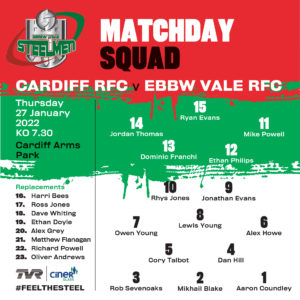 Looking ahead to their televised game with Cardiff at the Arms Park on Thursday night, returning Head Coach Jason Strange gives his thoughts on his return to the club, and looks ahead to his first proper game in charge.

“The boys have been great over Christmas, doing two or three sessions a week. I’m standing back a little bit and see where we are to know where we want to go with the lads, to create a game plan.”

“It’s better coming into the club this time round than it was when I first came here in 2010, I think it was, where we only had 6 players on the books and were in the Championship. At least we have 25 of our own players this time and are in the Premiership.”

The club had only won twice this season before Jason arrived and sat on the foot of the eastern conference of the Indigo Group Premiership Cup. Despite the obvious challenges ahead, Jason knows exactly what he wants from the players, and where he wants to go with them.

“We’ve worked on fitness a lot, and they’ve found that tough. Coming in, I’ve looked at the behaviour to see what type of group we are and what we want to be, on and off the field. Boys like Ross Jones and Aaron Coundley have added plenty of experience and we’re a young squad.

“We’re looking at recruiting all the time, similar to what we do at St. Helens’, and the boys we want to bring in are those who need a chance, like Alex Howe at Abergavenny. I’m also looking at a few local boys as they’ll bring and understand the passion that they need to bring and succeed at the club.”

Supporters are urged to click record on their TV and head to the capital via train, bus or car and get behind Chippy and the boys, to make sure Cardiff #FEELTHESTEEL!!!

Anyone attending will require a Covid-19 pass. Get your digital pass at https://gov.wales/nhs-covid-pass-prove-your-vaccination-status

Our Indigo Group Welsh Premiership fixture against Newport RFC has been re-arranged for Thursday 24th of February with a 7:30pm kick off. The game will also be shown live via the s4c CLIC service online via youtube and facebook

Our Indigo Group Welsh Premiership fixture against Llanelli RFC has been re-arranged for Friday 4th of February with a 7:30pm kick off.

Pre purchase your tickets here for ease of entry https://www.evrfc.co.uk/product/indigo-welsh-premiership-friday-4th-llanelli/

Our Indigo Welsh Premiership fixture against Cardiff will now take place on Thursday 27th of January at Cardiff Arms Park with a 7:30pm kick off. The game will be shown live on S4C Chwaraeon

On Tuesday 18th January, Ebbw Vale will take on the Welsh U20’s side in a training fixture at the CiNER Glass Community stadium Eugene Cross Park. This will be two thirty minute halves and will kick off at 7:30pm.

This fixture will be open to season ticket holders only and 100 limited tickets available to buy online. The proceeds from ticket sales will be donated to the mini and junior section.

If you are not a season ticket holder or have a pre purchased ticket you will not be allowed entry due to a 500 crowd limit as part of Welsh Governments current covid restrictions.

Ebbw Vale RFC can confirm that our Indigo Welsh Premiership fixture against Llanelli RFC on Saturday 15th of January at the CiNER Glass Community stadium Eugene Cross Park has been postponed.

The decision has been made following the changing landscape of the public health situation relating to the Omicron variant of Corona Virus, and the Welsh Government decision to force all sporting events in Wales to be played behind closed doors,

The hugely popular Ross Jones has answered the call to arms and having decided to come out of retirement, Ross was about to sign at Pontypool but did an about turn back up the valley to Eugene Cross Park following a short discussion with Jason and Chairman Jon Jones.

Ross has always added a great amount of value off the pitch, leading by example in training and always being available to young front row forwards as a mentor. He is guaranteed a big welcome back from the Ebbw Addicts

21 year old Hooker Harry Bee has joined the club from Blaenavon RFC after impressing the coaches in training, another who brings a powerful carrying game into the squad

Centre Ollie Andrews joins from Penallta RFC, another who has impressed the coaches in training with his pace and ball ability. He has previously represented the Dragons Academy and is a student at Swanseas University

The following players have left the club

Outside Half Lewis K Williams has taken a step back from rugby to try and resolve a recurring back issue which has affected his ability to work. Lewis endeared himself to the Ebbw Addicts with a superb display at Merthyr in the first game of the season which was capped with a nerveless winning penalty in injury time

Jason Strange has confirmed the following additions within his coaching team with the appointment of a highly experienced forward’s coach to follow in the next 6 weeks.

Aaron Coundley has been appointed as Scrum Coach and will also occasionally play as required. Aaron made his debut in Senior Rugby from the Dragons Academy in 2009/10 season, played for the Dragons senior team and has had spells with Neath and Pontypool where he has impressed with his ball playing and scrum abilities. This is Aaron’s first official coaching role but he also assisted in this area during his time at Pontypool RFC

Aaron will be joined on a part time basis by club legend Matthew “Chunky” Williams who will combine his role as Oakdale Head Coach with working on the scrum and line out. A renowned exponent of Lineout throwing he will use his expertise and understanding of the club following his 280 plus games for the club over 15 seasons that was ended by a shoulder injury.