Ebbw Vale RFC are excited to announce the signing of exciting back Ryan Davies from Gwernyfed RFC.

Ryan is an exciting talent with plenty of pace who can cover wing of fullback. When we played Cardiff away this year Ryan was at the heart of the Cardiff attack and showed plenty of pace on the wing.

I am really excited for the season ahead with Ebbw Vale. I’m looking forward to getting stuck into preseason and then get a good start to the league. It will be nice to see some new faces and have a fresh squad and can’t wait to see how the new coaches will develop my game more.

Honours-going from playing division 4 rugby one weekend to making my debut for Cardiff RFC in the Indigo Premiership the weekend after. 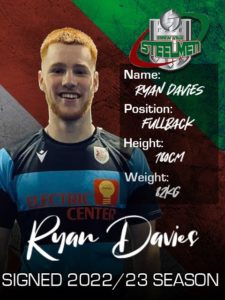