Ebbw Vale RFC is excited to welcome Haydn to the steelmen for the coming season. Haydn will offer an attacking option at 10 or 15 as well as being an accomplished goal kicker and add further strength in depth to the squad that is being built.

Having played against Ebbw Vale on numerous occasions I’ve experienced the great atmosphere that the Ebbw Vale fans create. After talking to Jason about the club’s ambitions it was an easy decision to make. I’m excited for a new challenge and can’t wait to start playing in front of the Ebbw fans.

Position: Outside half / full back 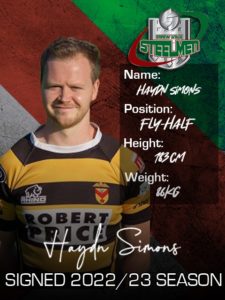