Ebbw Vale RFC are delighted to announce that former player Mathew Williams will take over as Head Coach for the youth team.

Mathew, known in the rugby community as Chunky, played nearly 300 games for Ebbw Vale and was an integral part of the squad’s success in winning leagues and becoming Premiership champions in 2016.

On his appointment Mathew stated, ‘It’s great to be back at the club that was a huge part of my rugby career and to be working with a talented squad of young players, who I hope all go onto having the same success I enjoyed with the club’.

Mathew started his coaching career at his local club Oakdale and Steelmen Head Coach , Jason Strange, is looking forward to supporting him further in his coaching career, ‘Chunky is a very good young coach and it’s  great to have in back in the fold. He will also be working with seniors, so that we have that clear route and continuity for young players coming through as part of our Premiership Pathway programme’ .

Any 16-18 year olds wishing to be part of the youth and development programme at Ebbw Vale , please contact Head of Coach & Player Development, Alun Harries on 07932 024408 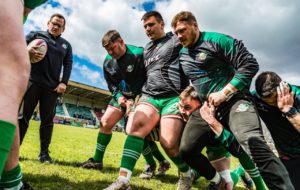