23 year old second row, Morgan Thomas joins the club from Dowlais RFC where he has been coached by former Steelman Captain Kristian Owen. Morgan has a strong rugby pedigree with his father and two uncles having represented Merthyr RFC over many season. Standing at 6ft 5” and 115kg with the ability to play 15 man rugby that the Steelmen will be playing this season he will be one to keep an eye on this season.

On signing for Ebbw Vale Morgan said; “It’s been a pleasure to join Ebbw Vale and I can’t wait to get stuck into pre season training. 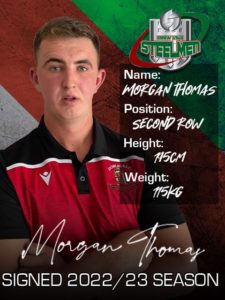