Ebbw Vale Side To Play Pontypridd

Ebbw Vale Side To Play Pontypridd

The Steelmen have named their squad to take on Pontypridd this Saturday in the Indigo Group Premiership Cup at Eugene Cross Park 2:30pm.

We are calling on all the Ebbw Vale addicts to once again Pack The Bank and shout on the Steelmen in a fixture that should be very entertaining!

The boys have worked hard this week looking to build on the win we had against a tough Merthyr side. We know we’ve a huge challenge waiting for us on Saturday in the form of Ponty, and have been impressed with what we’ve seen of them so far.

I know the boys can’t wait to run out in front of our great home support, who we hope will turn up in their loud numbers, as they do. 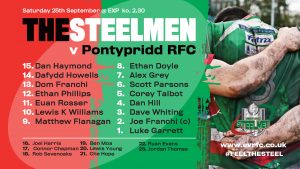