The new arrangement will see CiNER’s branding take pride of place on the front of the club’s famous green, red and white jersey and as the stadium naming rights partner. CiNER has also invested considerable funds into the club’s junior academy to help the next generation of Ebbw Vale stars and to bounce back stronger following a challenging 18-month period of no rugby.

Gareth Howells, Commercial & Marketing Manager for Ebbw Vale RFC said; I would personally like to thank the CiNER family for supporting Ebbw Vale RFC through this landmark deal and but also giving hope to the people of Ebbw Vale with future employment coming into the town that will give Ebbw Vale a big boost.

Mrs Didem Ciner, Executive Board Member, CiNER Glass met with the Chairman of the club Jon Jones, members of the junior team, as well as head coach Greg Woods to discuss the clubs’ aspirations for the forthcoming season. She was also greeted by Blaenau Gwent’s local Member of the Senedd, and avid steelmen supporter, Alun Davies MS.

Speaking about the visit to Ebbw Vale Rugby ground, Mrs Ciner said: “We are absolutely thrilled to become part of the fabric of this historic club. Our commitment to Ebbw Vale is extensive, and we want to make sure we invest in all parts of the community. Rugby fans from across the town have missed out on a year and half of their beloved sport, and we hope our partnership marks the start of a successful season for the club.”

Chairman of Ebbw Vale Rugby Club, Jones Jones commented: ‘‘Over the last 18 months, we have navigated the most challenging period in the club’s 142-year history, so to have secured this deal now is an incredibly significant moment for us. Our partnership with CiNER Glass is a fantastic opportunity for the club and we look forward to working with our new partner CiNER Glass, who we know share our ambition for Ebbw Vale.

“While the name of the stadium will change, the essence of the ground remains the same, and we look forward to investing in the future and creating many more fantastic memories with our supporters this season.

The move marks the latest announcement by CiNER Glass who are committed to investing in the future of Ebbw Vale. Earlier in the day, Mrs CiNER met with First Minister

Mark Drakeford to discuss the company’s plans to build a glass container manufacturing facility which utilises recycled glass in Ebbw Vale. The duo visited the proposed site, a 21.5h vacant plot located just north of the town, within the Rassau Industrial Estate and allocated within the Ebbw Vale Enterprise Zone, to outline the economic and environmental benefits of the project. 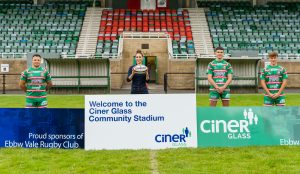 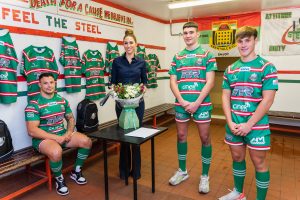