We are excited to welcome top young prospect Curtis Gregory to Ebbw Vale RFC. Curtis has experience in playing in the Welsh Championship and is keen to work with the coaching staff at the club to develop his game and help Ebbw challenge for honours in 22/23. Curtis joins a club where he has strong fiends and family connections, with school team mates, Ethan Philips, Dawid Rubasniak and Joel Harries members of the Steelmen squad. His father Mark has also played for the club with younger brother Max having developed through the Mini and Junior section and will be a prt of the Steelmen Youth Squad in 2022/23

Curtis had to say on his signing.

My ambition has always been to play Premiership rugby and I was over the moon when Ebbw Vale offered me the opportunity to play for my local club. I have worked with Jason in the past and he is a coach who I have looked up to and am looking forward to being coached by again. I look forward to the challenges ahead and playing in front of the Ebbw supporters 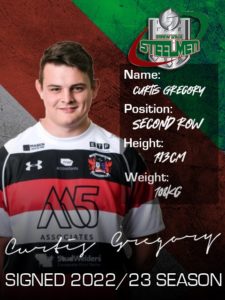