We are delighted to announce that 6ft 3 second row forward Andrew Mann is returning to Ebbw Vale for the 22/23 season. Andrew has a wealth of experience in the Welsh Premiership and is looking forward to playing in front of the Ebbw Addicts

Andrew had this to say on joining Ebbw Vale;

After spending the last 5 seasons away with Newport RFC, I have looked to play closer to home as I have work/family commitments to fulfil with a newborn on the way, really excited to see what the future holds with Ebbw as they’re a very close bunch and play with a lot of heart, looking forward to pulling on the jersey at Eugene and play in front of a very loud crowd 🙂

Honours: Winning the premiership cup with Newport RFC, Coaches Player of the year for Newport 19/20 season. 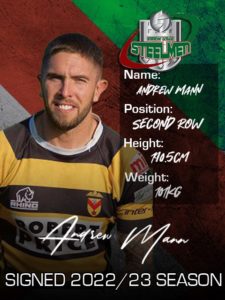