It is with much sadness that we have heard of the sudden passing of Steelmen supporter Ruth Sheppard (December 3rd).
Ruth had been a committed Ebbw Addict for years and was regularly seen alongside her father Gary until his passing in early 2016. Together they played a big part in sprucing up the ground ahead of our Premiership return as well as following the team everywhere. A huge smile has left our ranks and our thoughts are with her husband Adrian, and children Jess and Dan.

Ruth’s funeral will take place St George’s Church, Tredegar at 1pm on Friday, December 15th. This will be followed by cremation at Llwydcoed, Aberdare at 2pm and a get together at The Welfare, EVRFC afterwards. 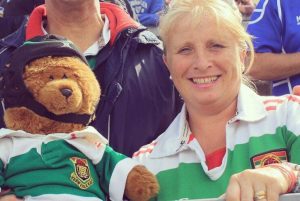