On a typical winter type day,Ebbw Vale fielded a squad of young and new players for the Talywain 7’s tournament. Ebbw got off to a slow start, losing 28-5 to a seasoned Ponty Butchers side. James Gahan set his strong running intentions off from the start, coupled with a great debut from Matt Cross. In the second game, Ebbw faced hosts Talywain and showed a lot more structure and attacking prowess with a 47-0win. In the 3rd game the Steelmen played pre-tournament favourites Samurai and found them too strong in both attack and defence, as they raced to a 38-7 victory.

In the fourth game, Ebbw played local Gwent rivals and last year’s winners Pontypool, and the game didn’t disappoint, with stoppages on a few occasion amidst scenes from the local derbies of the 70’s. Although the Pontypool half back was red carded late on for a fracas, his side clung on for a 12-7 win.

In the final game, Ebbw Vale met the Egg Chasers from Blaenavon, and left the best till last with some fantastic tries scored, including one by coach and ex-Wales 7’s player James Lewis from his first touch.

All in all it was a useful outing for the players to blow the cobwebs off and for the coaches to take a look at a few potential additions. All players gave it their all and left nothing out there. A big mention must go to Levi Jones, a product of Coleg Gwent, Ebbw Vale, making his debut today; he surely has a bright future ahead of him

Samurai beat Pontypool twice – once in the final to win it.  The Samurai 7 was coached by former Ebbw player and coach Nick Wakely. Congratulations to Nick and his players, many thanks to Talywain for hosting and best of luck to all the players for the coming season. 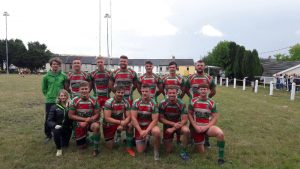