Ebbw Vale are delighted to announce the signing of former Scarlets, Dragons and Bath scrum half Jonathan Evans.

Jonathan has also represented Wales U20’s gaining 18 caps, as well as featuring for Bargoed, Newport, Bedwas, Carmarthen Quins, Pontypool and Cross Keys RFC. This shows the experience Jon will bring to the side from playing in the Welsh Premiership and international level.

Jon commented “I am really looking forward to the challenge that the new premiership season is going to bring. I know how good and loyal the Ebbw Vale supporters are and I am looking forward to working with a great coaching team and a great group of players at Ebbw Vale”

Head Coach Greg Woods said “ It’s great to bring Jon into the squad ahead of the league campaign. His experience and game management will be valuable for our young squad going forward. I am excited to work with him and he will be a real good addition no doubt. 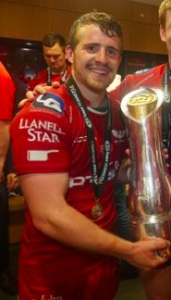