Steelmen Side For Cardiff Met

HOME > Steelmen Side For Cardiff Met

Steelmen Side For Cardiff Met

Ebbw Vale take on Cardiff Met ‘ The Archers’ this Wednesday evening 8th September at Eugene Cross Park. Kick off is 19:15pm and this will be our last pre season fixture before we turn our attention to the new Indigo Group Premiership Cup competition which starts on Saturday 18th September away to Merthyr.

“The whole playing squad and management are excited to be back playing at EXP after  very long 550 days away. We have had a tough pre- season on the road and the thought of playing at home in front of a packed bank excites all the boys. Playing Cardiff Met RFC under the EXP lights is a perfect way to be back as it will be some game played at a high tempo. I look forward to seeing you all back on Wednesday night”.

We are calling on everyone from across Ebbw Vale and Blaenau Gwent to come to Eugene Cross Park this Wednesday and shout on the Steelmen and pack the bank!

All entry donations £3 will be going to our nominated charity Hospice Of The Valleys.  Those who cannot make the game can still pledge a donation to the Hospice via the following link https://www.crowdfunder.co.uk/support-the-steelmen-hospice-of-the-valleys 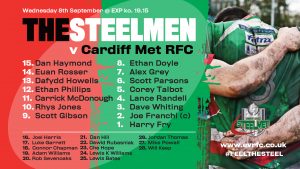