The Steelmen head to Newport Stadium for their final clash of the Indigo Group Cup match of the season, as they conclude the first half of the 2020-21 season with a Gwent clash. Newport have been historic foes for many years, with the last meeting ending with a convincing 44-17 victory for the visitors.

Ebbw have looked stronger since that day, despite not managing to pick up a win. A gutting last-play try against RGC last Friday costing the Steelmen a first win since Pontypridd back in September.

Expect a tough battle at Newport’s new home as the Black and Amber’s look to top the eastern division of the cup.

Having scored 79 points in their last two games, Greg Woods’ side will be under no illusion of how difficult an outing it’ll be.

The game will be a chance for Ebbw to gain some form before the Indigo Group Premiership begins on December 11, and an opportunity to blow some cobwebs out of the system, as maths now dictate Ebbw will be bottom no matter of Saturday’s result.

The positive news is that the next time we meet Newport – Boxing Day fixture – it’ll be televised on S4C, so hopefully that’ll add to the exposure of the league, gaining much needed credit for the product.

Make sure to pack out Newport Stadium, not Rodney Parade, and give the boys the backing to ensure Newport will #FEELTHESTEEL!!! 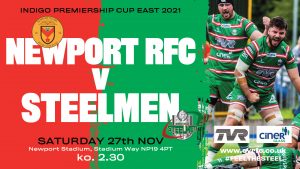