Ebbw return to Indigo Group Premiership action with a trip to local rivals Merthyr. It’ll be a return of a new dawn for the Steelmen as Jason Strange re-takes control of the reigns at the CiNER Glass Community Stadium.

Jason will be hoping his side can repeat their fortunes of the last trip to The Wern and walk away with a victory to end an eight-game losing streak.

Having had a fortnight off, Ebbw have rested some weary bodies ahead of the vital clash in a shortened Premiership season. There will be no relegation and you’ll play every team home or away.

Merthyr battled strongly in the Cup, finishing a sturdy third. Both fixtures between the Ironmen and Steelmen have been closely fought ones, and it is expected that the decider will be the same.

Merthyr beating Ebbw 20-16 away, following Ebbw’s last minute 26-24 triumph to kickstart their campaign back in September.

It is hoped that the rest period may help the likes of Corey Talbot, Lewis K Williams and Dafydd Howells get back to fitness and create some depth once again.

A quick reminder to supporters that it is a Christmas jumper game, but make sure to get plenty of red, green and white over the valley to get the boys back on track and ensure that Merthyr 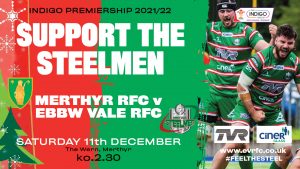