McDonough Signs For The Steelmen

HOME > McDonough Signs For The Steelmen

McDonough signs for the steelmen

Addicts favourite Carrick McDonough has signed for the steelmen for the 22/23 season from the Dragons. The former sprinter and Wales u20s wing is looking forward to getting stuck into pre-season with the boys and learning of Jason and the other coaches to develop his game. Carrick will also continue to work with Wales 7’s in the coming season

I’m very excited to sign for Ebbw Vale this coming season, the club is rebuilding, and I know the 22/23 season is going to be a promising one, the new coaching staff are adding new things to the club and the new boys coming in will make a difference. 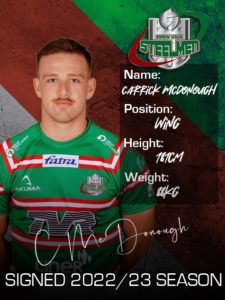