Ebbw got their first win of the league campaign and their first win since September as they took down Llanelli 22-12 at the CiNER Glass Community Stadium on Friday night.

The pack were well on top as the healthy crowd were in fine voice, the first loud roar of the night coming when Alex Grey crossed over the whitewash after some hefty forward work.

It was once again Grey who got the second try, but kudos must go to the likes of Dom Franchi whose stinging tackle near the bank on the Llanelli winger echoed around the ground.

Rhys Jones was also back in fine fettle, as he utilised the wind that was with the hosts to great avail. The Steelmen leading 17-5 at the break following a late Llanelli try.

Jason Strange’s side would once again resume control when Daf Howells bagged yet another try for Ebbw, crossing in the far corner to put Ebbw within a shout of a bonus point. Despite some major chances it never came, but the home crowd were in fine spirits seeing the boys back to winning ways and having some key players back from injury.

Looking back at the game Jason said, “after Cardiff last week it was a big improvement. Probably the biggest plus was the players stuck with what we asked them to do and executed it well. On top of that there was a lot more emotion and desperation, which should be the minimum.

“I’m always going to be greedy, but I felt we left the bonus point out there and we deserved it, but in the last half hour we got a but frenetic. If we’d been a bit more clinical, we could have bagged two or three more tries, but that’ll come.”

The club goes again on the 19th when we welcome another West Walian outfit, Carmarthen Quins to the CiNER Glass Community Stadium Eugene Cross Park. 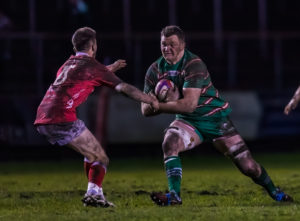