Getting into the spirit of its new European headquarters in South Wales (United Kingdom), SIMBA Chain is now a sponsor of Ebbw Vale’s semi-professional rugby team, the Steelmen. Rugby is Wales’ most popular sport, and Ebbw Vale’s club is among the best teams in the Welsh Premier Division.

Last month, the Welsh government announced it is providing financial incentives to the United States-based blockchain company to open a location in Ebbw Vale as part of its Tech Valleys program. In return, SIMBA Chain is creating 26 high-paying jobs. SIMBA Chain closed a $25 million (U.S.) investment in early September, and is hiring across its organization to scale its business across enterprise, government and educational sectors.

SIMBA Chain’s Director of U.K. Operations Matthew Shields says the sponsorship reflects the company’s goals for Ebbw Vale. “When this opportunity was presented, we were drawn to the 125-year history of the Steelmen. Rugby is a demanding sport, but with discipline and true fighting spirit, this club always prevails which is exactly what SIMBA has set out to do. We are pleased to support the club and eager to attract people with a passion for blockchain to our team.”

Ebbw Vale Rugby Commercial and Marketing Manager Gareth Howells says SIMBA Chain joining its fan base is big news for the club and will raise awareness of the blockchain company across the UK and the Premier Division. “We play teams from across Wales and the U.K., so having SIMBA Chain’s logo on our kit will be great publicity and certainly a win for both.” We would like to thank SIMBA Chain’s CEO Joel Neidig for supporting our club and investing in Ebbw Vale.” 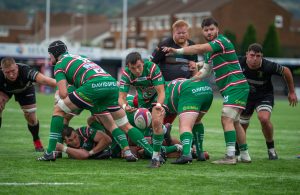