Ebbw Vale RFC will be joining the Welsh Rugby Union, along with various other sports teams and organisations in taking part in a social media blackout from 15:00 BST on Friday 30th April – 23:59 BST on Monday 3rd May in a show of solidarity against online abuse.

Everybody at EVRFC has been deeply disappointed to see some of the vile abuse people on social media seem to think is acceptable to direct at sports people just doing their job.

The words you say can have a massive impact on the wellbeing of sports people, they are human too.

We hope that everybody would take this time to think about the way they behave online and how we, together, can stop this trend of online abuse.

We wish everybody connected with EVRFC a very good bank holiday weekend and ask you enjoy yourselves safely and responsibly. 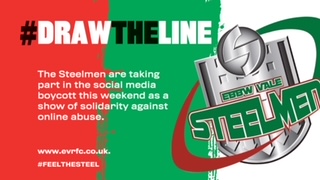