Ebbw Vale Side For Merthyr Away

The Steelmen have named their squad to take on the Ironmen this Saturday in the new Indigo Group Premiership Cup at the Wern 2:30pm. We are calling on all the Ebbw Vale addicts to come and get behind the boys and shout them on. It has been a long time without rugby and this should bring an entertaining game.

After 18 months without competitive rugby, it will be fantastic to see Ebbw Vale RFC take to the field against Merthyr on Saturday afternoon. The players have worked extremely hard throughout pre season and we are looking forward to the challenge ahead within the Indigo Premiership Cup. As always the support of the Ebbw Addicts is greatly appreciated by Players & Staff and it will be great to see you all at The Wern on Saturday supporting the team. 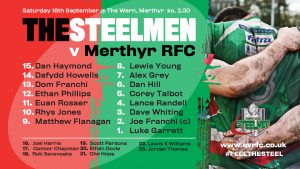