We round off the season when host Bridgend at the CiNER GLASS Community Stadium on Wednesday night (7.30KO).

The Steelmen enter of a short break following a disappointing loss away to Pontypridd. Ebbw currently sit tenth in the Premiership, just three points above the Ravens. A win is vital if Ebbw wish to keep two sides below them and could overtake Swansea should a bonus point victory take place.

Looking ahead to the game Jason said, “It’s always good to finish with a home game and hopefully take away the win and the performance. Unfortunately, the effort was there against Ponty, but accuracy and consistency were missing.

“I think a win is important for the supporters, but also the players. There’ll be a lot leaving on Wednesday and it’ll be nice for them to finish with a win.”

Despite a ‘different’ season due to Covid, let’s make sure we pack the bank and get behind the boys before we all head off to relax for the summer break.

You can get tickets in advance here; https://www.evrfc.co.uk/product/indigo-welsh-premiership-saturday-26th-march-bridgend/ or you can buy them on the gate on the day.

Let’s get behind the boys one last time this season and make Bridgend #FEELTHESTEEL!!! 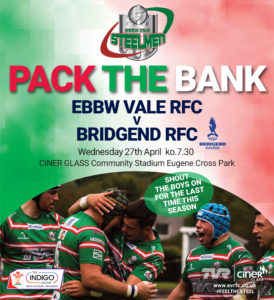